Lighter. Much lighter. With a new HRC-honed chassis balance and suspension that deliver faster corner speeds to build quicker lap times lap, after lap. And an engine that drives you from nowhere to the red zone, with total control in your right hand.

Any rider will use an advantage. Why not have them all?

We’ve taken the CRF450R and upped the game. That’s what winning an MXGP world championship is all about. A completely new frame saves weight and features a factory-rider rigidity balance, with revised steering geometry and suspension that shred turns. The engine features a redesigned intake, cylinder head and exhaust system that deliver stronger mid-range power and low-rpm torque, with smooth throttle response. A revised decompression system and new hydraulic clutch add relentless tenacity. Honda Selectable Torque Control (HSTC) offers 3 modes of power management for ultimate rear wheel traction, while HRC Launch Control owns the first 100 metres. And its new bodywork is slimmer, lighter and easier to move around. Seizing the holeshot and building your lead has never been easier. Neither has the win.

The difference lies in the detail.

Championships are not won by luck. They’re won by design. Ask HRC and Tim Gajser. So, we looked at every single part of the CRF450R and made it better, thanks to their efforts. For starters, it’s 2kg lighter, which you notice, instantly. We started with the chassis. Narrower main spars shave 700g and a new, simplified subframe saves 320g. Most importantly, what you feel has been upgraded; the rib positions behind the swingarm pivot points have been changed and with torsional rigidity maintained, lateral rigidity is reduced by 20% to increase corner speed, traction and steering accuracy. The aluminium swingarm has a rigidity balance tuned to match the frame, thanks to narrower arms. The Pro-Link ratio is also revised. Rake and trail are tighter for sharper steering and there’s more ground clearance. Showa’s 49mm USD coil spring fork has an extra 5mm stroke and the axle clamps’ rigidity increased, along with the top and bottom yokes. Larger main piston valving in the Showa rear shock give faster response and improved bump absorption. And the spring uses super-lightweight steel.

There’s more power from 5,000rpm up. And for a stronger, smoother low-rpm torque feel, the airbox is larger with tool-free access to the filter. It feeds a redesigned throttle body, which optimises intake efficiency. A steeper injector angle sprays fuel all the way back to the butterfly, improving throttle feel. And the decompression system is new; its counter-weight moves from the right of the camshaft to the left, giving more stable operation at low rpm with increased stall-resistance. Twin exhaust ports use an ovalized exit and a new single downpipe and muffler saves 1.24kg. The clutch has an extra plate and is hydraulic, improving both control and feel at the lever (it’s 10% lighter) as well as delivering consistent lever clearance when things get hot. Really hot. Saving precious grams are a new magnesium cylinder head cover and smaller, lighter fuel pump. 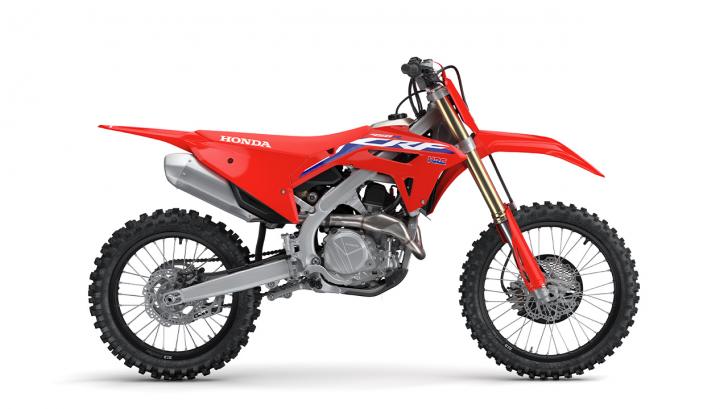